Pumping tests are often analyzed with analytic solutions (e.g. Theis, Hantush-Jacob, Neuman) that assume radial symmetry, constant saturated thickness, and a single layer.  While these are appropriate in many situations, a more sophisticated analysis is better when partial penetration, layering, saturated thickness variations, and/or irregular boundary conditions are present.  This example shows how AnAqSim can be a used to analyze such situations.

This example model comes from a project where there was data from historical pumping of a partially-penetrating production well during three 12-hour pumping episodes.  The pumped well screen was short relative to the saturated thickness of the unconfined alluvial aquifer which was stratified with some layers much more conductive than others.  Drawdowns were measured at the pumping well and at three nearby observation wells that had partially-penetrating screens above the level of the pumped well screen (see profile at right).  The drawdown measurements were sparse hand measurements.  During one pumping episode, borehole flowmeter data was collected in the pumped well showing how the discharge to the well was distributed vertically along the screen.  There were no nearby boundaries that affected drawdowns here.

The available observations are:

The model consisted of 9 layers that correspond to the site geology and the elevations of the pumped and observation wells.  Levels 1 and 2 represent a recent alluvial formation and levels 3-9 represent an older alluvial formation.  Level 1 was modeled as an unconfined domain and levels 2-9 were modeled as a confined (fixed transmissivity) domains.  Domain inputs for the calibrated model are shown below.

The model covered a circular area of radius 6000 ft, which is significantly larger than the area impacted during a 12-hour episode of pumping.  The datum for elevations in the model is the initial water table and initial heads were set as constant and zero everywhere.  Heads at the outer boundary were maintained at zero through the simulation.   The outer boundary in all 9 layers was modeled with these lines of input shown at right. 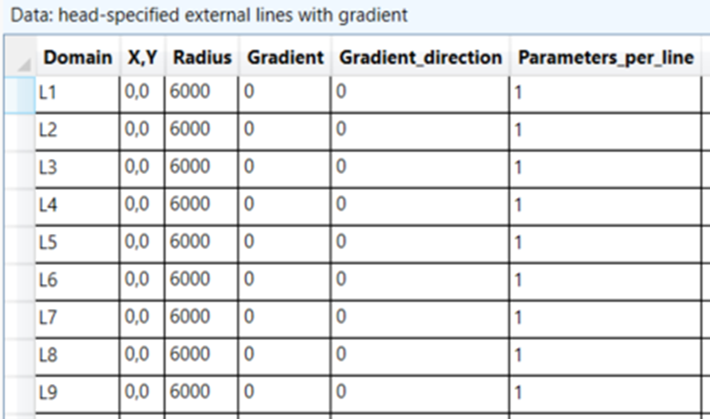 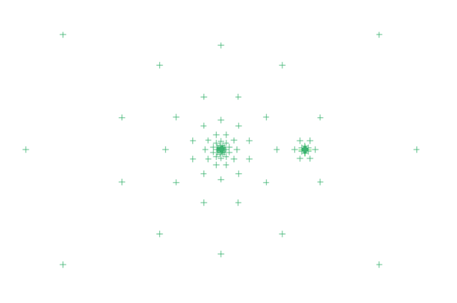 The model had 6 time steps and a time step multiplier of 2.0 (inputs at right).

The hydraulic properties of the layers were adjusted in a manual calibration that matched all the observations reasonably.  To constrain the parameters somewhat during this process, the following assumptions were made:

The calibrated model properties and the domain input table are shown at right.   The calibrated K, specific storage, and specific yield values are all within typical ranges for dense sand and gravel.

The simulation had negligible head changes at 12 hours of pumping outside a radius of 2000 ft, as shown at right.  Thus, the constant head boundary at a radius of 6000 ft had no significant impact on simulated drawdowns.  This plot was generated within AnAqSim using Analysis/Graph Conditions Along a Line.

The figure at right compares modeled drawdowns to observed drawdowns at observation wells.  The monitoring wells were measured three different days, each during a 12-hour episode of pumping at 850 gpm.  The simulation matches the shape and magnitude of the observed drawdown curves, and the simulation was sensitive to both hydraulic conductivities and storage parameters.  This plot was generated using Analysis/Graph Drawdown Hydrographs. 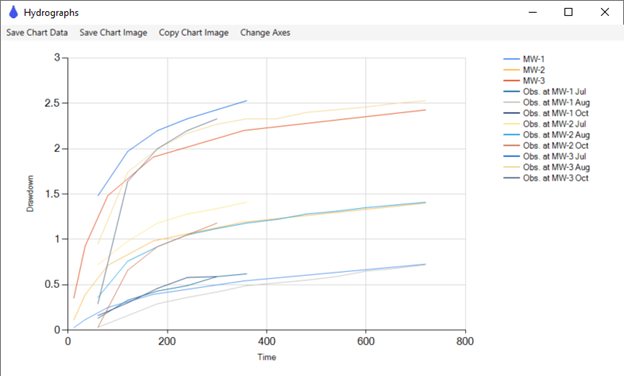 The simulated drawdown at the pumped well is shown at right, and it is in the same range as is typically observed during a pumping episode (38 to 42 ft).  This graph was created using Analysis/Discharge-Specified Well Heads/Graph Transient Heads. 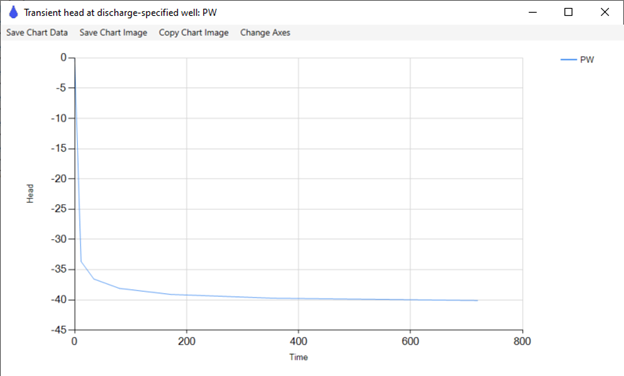 The observed and simulated distribution of discharge to the pumped well screen is shown in the plot and table at right.  The simulation approximately matches this distribution, with much larger discharges in the upper portion of the well than in deeper portions.  The discharge breakdown for a multi-level well are available under Analysis/Multi-Domain Well Discharges by Domain. 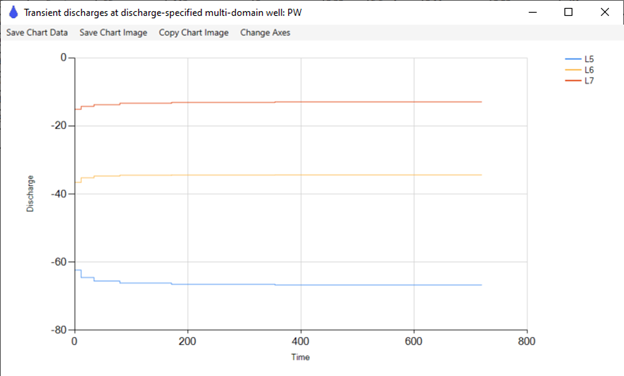 The model was developed and calibrated manually in one day, and each run with 6 time steps took less than 10 seconds to solve on a standard laptop.

Here is a link to a zip file containing the AnAqSim model input file and the observation well drawdown data file, for those curious to experiment with this model.